About UsNewsQ&A with our ATM Director, and military expert, Chris Foster

Please introduce yourself and explain what you do in your current role?
I started a new role this year as ATM Director, so I am the focal point at executive level for all ATM-related subjects. I make sure that Micro Nav stays at the forefront of ATM developments to ensure simulation products are capable of producing realistic results for customers. I’m also the lead Subject Matter Expert (SME) for ATM, with a team of ex-controllers, operating as the interface between ATM customers and Micro Nav engineers to ensure optimum development of new and existing simulation features, which means I speak both languages – ATM and technical. 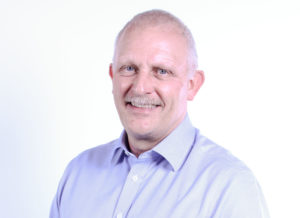 Why did you choose to join Micro Nav?
I always had an interest in simulation having used it, or been responsible for it, in my previous roles in the Royal Air Force and NATS. I had previous experience of the Micro Nav product and, when leaving NATS, met Mike Male, one of the founders of Micro Nav, who was keen to get me on board with my current ATM experience.

What is your previous industry experience?
I spent 30 years in the Royal Air Force as an Air Traffic Controller, covering all disciplines, including Instructor and Examiner. I was a member of the joint civil / military project team for the NATS Swanwick Centre, working up all operational procedures and running the large series of simulations to prove the operational concepts and equipment. I also commanded the London Joint Area Organisation (LJAO) military unit at West Drayton throughout the period of transition to the Swanwick Centre, and then for the first 4 years of operation.

What, in your opinion, differentiates Micro Nav from other ATC simulation suppliers?
Our strapline is ‘By Controllers, For Controllers’. Over the years, Micro Nav has operated as an ‘Intelligent Supplier’ using our industry knowledge and expertise in the world of simulation and training to guide existing and potential customers towards getting the optimum solution for their simulation needs. We have a very versatile product that can be used for multiple types of simulation and for many different roles, not just training.

What value does BEST bring?
As it uses predominantly commercial-off-the-shelf (COTS) hardware, running on a Microsoft Windows platform, BEST provides a highly cost-effective mechanism for the use of an ATM simulator in its various guises. The fact that a BEST system can be easily expanded or enhanced means that an initial relatively simple simulator solution can be acquired and then, as either experience with the system or growth of the institution dictates, the system can be rapidly expanded at reasonable cost.

Is there anything unique about what BEST can offer?
BEST can be operated in a true gate-to gate environment, with the inclusion of civil and military operations in a combined simulation. The multi-capability of the BEST suite of applications, apart from just the ATC training role, makes it an extremely flexible tool for many ATM users.

Could you explain the other ways BEST can be used, other than training?
As already mentioned, the BEST suite of applications provides the user with an extremely capable and flexible set of tools that enables far more than just training.

• The extensive Data Preparation capability easily facilitates rapid prototyping of potential airspace and procedure design in a multitude of air traffic scenarios
• The BEST 3D Create Fast Airport Builder software facilitates prototyping of planned airport layout changes for aprons, taxiways, runways, parking stands, etc. and a rapid capability to trial them within the simulation environment
• The 3D Create software facilitates what-you-see-is-what-you-get (WYSIWYG) development of the 3D airport environment and quick creation of modified 3D airport files. This can then be used within the simulation environment to verify the positioning of new infrastructure and its impact upon the ATC operation.

All of these capabilities exist for the user without having to resort to Micro Nav for either assistance or actual compilation, reducing overall R&D costs. The abilities that the software applications provide can prevent expensive mistakes from being made, by trialling the planned changes before embarking on actual construction. 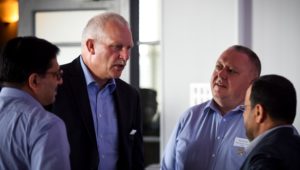 Could you mention any interesting uses for BEST that you’ve seen at specific customer sites?

One of the most interesting uses of a relatively small-scale simulator has been at East Midlands Airport where the simulator was used to coordinate a full-scale emergency services exercise. Rather than disrupt the whole airport, a realistic emergency scenario was created for use within the simulator and the actual simulator asset used to show the participants what would have been occurring in the real-world environment and to rapidly demonstrate alternative scenarios and solutions.

In a military application in the Middle East, the ATC simulator complex has been used to bring fast-jet pilots in to educate them in the methods of operation at specific air bases and for them to experience what it is like to be a controller. This has reaped benefits in the longer term with pilots having a better appreciation of the overall complexities of the ATC operation, rather than their inevitable focus on their own relatively small part within it.

How can an ATC Simulator benefit military organisations?
The standard BEST simulation software comprises both a civil ATC application, and also a specifically designed set of military operating procedures, which in the Tower environment can be very different to a civil airport operation. The military-specific functionality covers things like:

Away from the military ATC world, BEST also supports a full capability for Air Battle Management training ranging from the training of Intercept Controllers, to full-scale wargaming scenarios with automated attacking forces with variable behaviours. This includes a generic Recognised Air Picture display for the simulation of Air Defence scenarios.

The Maritime capability within the BEST software suite also supports shipborne operations in both the Air Traffic Control and Air Defence / Maritime Defence environments, including:

With your previous experience in a military organisation, why is BEST Defence the right solution?
BEST Defence provides any military ATC or Air Defence organisation with an ideal tool to train its controllers to a high standard before embarking on on-the-job conversion training.

Military airfields are notorious for having long periods of relative inactivity. The addition of a small-scale simulator at the airfield can significantly improve the maintenance of controlling currency, especially with unusual situations that can be hard to train in the live environment.

Also, specific to military operations is the need to occasionally re-establish an operating base at a remote airfield location, generally in a far-flung country. The BEST 3D Create capability, allied to a 3D simulator, enables these regenerated airfields to be created in a simulation environment with a full set of proposed operating procedures that can be used for evaluation and training of controlling staff before embarkation, saving a lot of time and effort in the operational theatre.

What is your proudest achievement during your time at Micro Nav so far?
From a BEST perspective, the complete rewrite of military procedures to make them far more realistic and functional from a military ATC perspective. As is common for other simulator providers, an attempt had been made to simulate military procedures using software that had been generally designed for civil ATC operations, but military airfield operations are very different, particularly at fast-jet and helicopter bases. Given free reign just after I joined the company, and supported by a dedicated software engineer, we completely redesigned the way that military ATC procedures are simulated, resulting in a fit-for-purpose set of functionality that was greatly appreciated by the specific customer at the time, and has since been rolled out to military users in multiple countries.

What customer site has impressed you, and why? 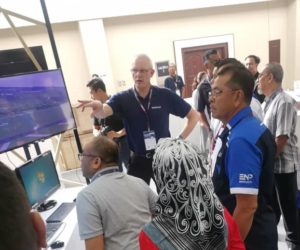 It’s difficult to pick a specific site as I never fail to be impressed when I visit any of our simulation sites, with the way in which our products support their training and associated simulator needs, and the enthusiasm with which they use the various tools to carry out their daily tasks. Our simulation sites range from very large training academies with multiple simulators, and in some cases hundreds of workstations, to very simple installations at a regional airport, for example. All provide extensive benefits to the users.

At any site that has a 3D projected simulator capability, you cannot fail to be impressed by the immersive nature of the training task within the simulator, and with the new-generation projectors, the realism that can be felt in the Tower environment.

However, for the ATC purists, the way in which we support en-route operations with full Flight Data Processing in either a simulated, emulated or stimulated environment can be equally awe-inspiring, especially with the work we are doing with new Advanced FDP displays in conjunction with Harris Orthogon.

What feature across the whole of the BEST suite provides the greatest value to a customer?
For a 3D Tower customer that is likely to operate in a college environment training students from multiple different locations on a regular basis, the BEST 3D Create software suite, and the BEST Data Preparation application are very powerful tools that enable them to create the air traffic environment anywhere in the world. As mentioned previously, this also benefits military customers, with the added benefit of being able to simulate proposed airfield layouts and procedures for a bare-bones, regenerated airfield in remote locations, and train the already-qualified controllers, before embarking to the exact location.

What would you say differentiates the BEST simulator from other ATC simulators?
From a personal perspective, the sheer breadth of capability within BEST for supporting multiple ATC disciplines in both the civil and military spheres is a big differentiator, as is the capability to ultimately run the simulator in a fully joined up manner if required, including all disciplines within a single simulation scenario. I would like to think that our capability and expertise in the integrated and stimulated environment is also a large differentiator. We have extensive experience with multiple customers across the world in this arena, and the BEST integrated and stimulated solution can be a cost-effective way of operating a simulator with real operational hardware, without the additional expense of the OEM software and operational processes.

To find out more about how we can assist your organisation, contact us here.