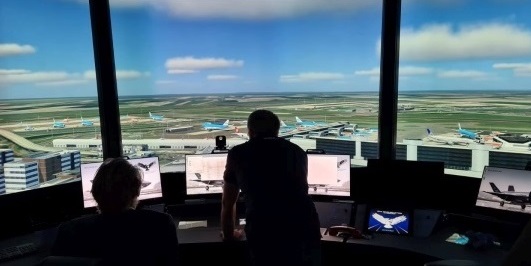 Micro Nav completes the relocation of the Royal Netherlands Air Force’s (RNLAF) Air Traffic Control radar and tower simulators from the Air Operations and Control Station at Nieuw Milligen to the new, purpose-built Amsterdam Schiphol East facility. The acceptance of the installation by RNLAF signifies the end of the relocation of a 360° 3D tower simulator and radar simulator suite, which were originally installed for RNLAF in Nieuw Milligen in 2008 to cover training requirements for Dutch military controllers.

The installation has been completed at RNLAF’s new training facilities with Micro Nav’s award-winning Automatic Display Alignment System being used, with a rear-projected 360° 3D tower simulator. It consists of 18 projectors to create an impressive 3D image on an opaque screen. A tower cabin built inside the screen adds to the realism. In addition, a mini 3D tower, and radar controller facility installed in consoles, which replicates the operational environment, provide RNLAF with a first-class, fully immersive simulation experience.

“Micro Nav has been much more than a simulator provider, they have been a partner. Their team of experts in every field is always there to support us in our continued use of the BEST simulator, are quick to react and flexible, helping us achieve our goals” says Meint Buitenhuis, Project Manager at the Netherlands Ministry of Defence.

To reflect the value of the simulation capability to RNLAF, the Netherlands Ministry of Defence has extended its support contract with Micro Nav for their ATC simulator, ensuring they benefit not only from a world-leading product, but also the highest level of care and service from Micro Nav’s team of experts.

Majoor Gertjan den Braven at the School of Air Control said: “Our relationship with Micro Nav goes back over 10 years. In this time we made numerous changes in both our operational system and procedures in the RNLAF. With Micro Nav’s support we have been able to keep our high level of training by adapting the simulator to our needs. With this relocation of the simulator we are taking the next step in our evolution and will be able to train the next generation of ATCOs on probably the most modern simulator around. Looking forward to train the tower and radar ATCOs of the future with this new simulator which is ready for that future of high quality training.”

“Extending their support contract with Micro Nav demonstrates the value this large military organisation has seen, and continues to see, in our support offering and the BEST product. RNLAF will benefit from the latest updates of the simulation software as the product evolves, and we are delighted to be supporting their ongoing commitment to the BEST ATC simulator” said Shane Hannam, Head of Sales and Marketing at Micro Nav.